A game by Francis Vace
In collaboration with Faulty
For his song Double Time Dash
Available now on Ponies At Dawn: Eternal

First of all I'll say that I liked this a whole lot. Gameplay ties well with music and for the most part it looks great. Vinyl's sections are particularly clear and pretty. Controls feel pretty good and responsive (for a one button game, that is) and it's a great way to spend ~30 minutes, varying greatly depending on player's experience with similar titles. Overall grade would be something like 8+/10.

That said, I have two issues with it.

First of all, I absolutely hate color scheme used in Derpy levels. Obstacles aren't immediately obvious and the red patches in background can easily be confused with terrain. Doubly so because similar patches are used in Octavia's levels to show you where to jump next. Yellow doesn't really work there and in some sections leads to even more visual clutter on screen.

Secondly, changing how particular pony moves during her section should be displayed on a screen in some way to prevent "unavoidable" deaths. To add to this, the Vinyl segment shown in second screenshot, especially jumping down at the correct time, is more precise than any other part of the game. It's fine to have some harder sections in an otherwise not too hard game but I'd either move it closer to the end or make it couple pixels easier.

Also at least for me there's no "THE END" screen, Octavia just continues to forever run out of screen.

I like it!  It has a reasonable amount of challenging sections, but the positioning of the checkpoints is pretty generous and you can usually just fine-tune your inputs to the difficult parts of a given section after you've had time to explore some possible ways through them. I don't usually play these kinds of rhythm-based platformers and I still got through the whole thing in under an hour without feeling bored or frustrated. The difficulty curve flattens out around the middle of the game so it gets easier as you continue to play it.

There's some pretty cool effects for the transitions, and while at certain points the visuals are hard to follow I usually had an easy time figuring out what to land on and what to avoid. There's enough visual variety to keep things interesting and pleasant without being too distracting.

Overall a fun, straightforward game. I figured I'd give it a shot after seeing the video but didn't realize I'd have this much fun with a game that has one input for 90% of its playtime. Thanks for putting it together!

Rage game, this is indisputably a rage game. This game takes a lot of precision and one mistake at that speed will take you back to the beginning. It will take you hours to finish just one section. But I did finish it at least! 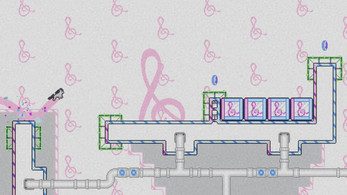 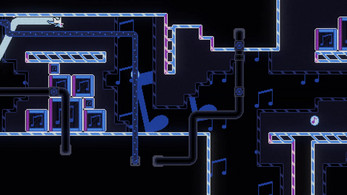 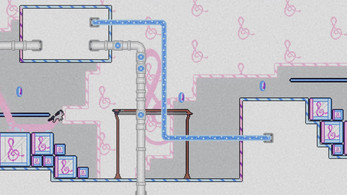 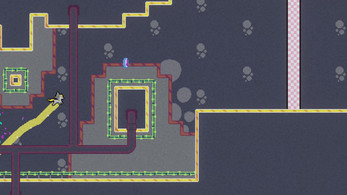